Vladimir Nabokov told us that good readers shouldn’t look to emotionally identify with the protagonist of a story, and for the most part I managed to avoid falling into that trap while watching Lady Bird. Most of the film didn’t engage me very much, but the working class guilt was like a gut punch: a sometimes overplayed, but always interesting thread that permeated the mother and daughter relationship.

The guilt in Lady Bird has many faces, but it is first seen when Lady Bird bemoans the fact that nothing ever happens in Sacramento and especially not in 2002. “Yours is the worst life of all,” sarcastically mocks the mother, before earnestly stating that her daughter has a “great life.” Lady Bird wants more and the fantasy of a life in New York where there is “culture” is the draw from the very opening scenes. Lady Bird is sorry for not being perfect and her mother just wants her to be considerate. Lady Bird is guilty of wanting more, the mother feels guilt for not being able to provide more.

Lady Bird has a desire for things, for a different (better, in her opinion) life, but it is a complicated feeling. When she and her friend stop in front of the ‘dream house’ for the first time in the film, her friend mentions the practical things that wealth could bring her, namely: her own bathroom and a garden big enough to get married in. For Lady Bird the wealth brings happiness that is much more abstract than things: “I’d have friends over all the time to study and to eat snacks.” She knows that wealth is hollow, she just hasn’t realised it yet. Indeed, when asking her mum to buy her a $3 magazine it’s again not the ‘thing’ she wants, but it’s being able to “read it in bed.”

The film does attempt to make some shortcuts when it comes to expressing working class guilt and for the most part these moments are clumsy: “this is with your employee discount?” the mother asks her son at the store, the director smacking us across the face with the poverty and frugality. But for the most part, Lady Bird provides a portrait of the way people without money fetishise and romanticise wealth. And the working class relationship to wealth is at times paradoxical. The mother tells Lady Bird that “money is not life’s report card,” but their favourite activity together is to go and visit open houses, examining the things and space and imagining the lives of the people that live there. Lady Bird wants more because she was programmed to want more by her mother. Her mother wants that ‘more’ to include her and Lady Bird feels guilty because it doesn’t. 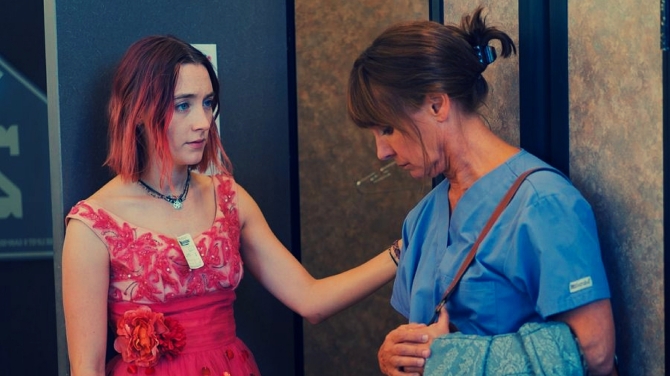 This push and pull runs through every scene involving to two of them. The mother is continually conflicted, at once guilty for not providing enough and then angry that Lady Bird has had more than she ever got and doesn’t appear grateful for it. “Didn’t you go to sleep without putting all your clothes away perfectly, not even once? And don’t you wish your mom hadn’t got angry?” asks Lady Bird, who had just been confronted about not taking care of her clothes (the famous line that all working class children hear: “I don’t know what your wealthy friends do…”). “My mother was an abusive alcoholic,” is the response. Guilt and jealously interwoven in a short scene.

Lady Bird, of course, has several explosive scenes where the poverty of the family is projected to the viewer: “everything we do is for you,” screams the mother. “Do you think we don’t know how ashamed of us you are?” and “whatever we give you is never enough.” But the film works best in the small details, the moments of dialogue that everyone from that class background will recognise: the mother making Lady Bird feel guilty about not spending her “last” Thanksgiving with the family; the mother’s feelings intensified by the fact that her daughter is instead going somewhere wealthier, somewhere with more and richer things. And, of course, the small scene on Christmas day when socks are the only present: “they are really nice socks…expensive actually,” smiles the mother, awkwardly.  Anyone familiar with a similar economic background has heard that voice with its defensive and pleading tone.

Lady Bird’s fantasy is personal, but universal. It’s identifiable to anyone that has grown up being told that they don’t need the thing they want. It’s the fantasy of kids whose parents play the lottery every weekend and talk about what they would do with the winnings. It’s the fantasy of kids that have the Gola football boots, but want the Puma King football boots (but only get them second-hand when everyone has moved on to Adidas Predator football boots). It’s the fantasy of elevation and fitting in once elevated. It’s not getting the thing, it’s having the life where you could get the thing. And it’s a fantasy that is only recognisable to people that can’t get the thing. As the friend says after discovering that Lady Bird had lied about where she lived: “I don’t even sort of understand why someone would lie about that.”

Lady Bird’s biggest achievement is its portrayal of guilt, jealousy and the guilt of jealousy. This thread of the film works so well because it feels like a love letter from a child to their parents. And as we children from working class families sit with our degrees and our fancy lifestyles, the thread mirrors the message we all want to send:  I will never be able to fully articulate the gratitude I have for all the sacrifices you made.

What are your thoughts on Lady Bird? Do you agree with Graeme’s take? Comment below or tweet us@WarpedFootage