The arrival of Halloween (2018) sees a return to the fundamentals of what the story is all about. The genre defining series gets a soft reboot in a modern world full of scarier things than the bogeyman.

As Michael Myers walks past a crying baby, kitchen knife in hand, briefly looking into its cradle, a wry smile crosses my face. The Halloween reboot has made Michael Myers a genuine force of nature once again. As he saunters through Haddonfield, randomly and brutally murdering, it’s clear that this is the Michael Myers of the original film and not the subsequent sequels.

In a time of mass shooting and visceral depictions of violence on our TVs and timelines, Michael Myers could be categorised as just ANOTHER in a long list of threats the average American faces. In fact, this is referenced by a character in the film when he glibly remarks that Myers “ONLY killed 4 people?” but still the idea of a motiveless masked serial killer still sends a shiver down my spine.

Halloween needed to be more than just a slasher film and it certainly is. Classic tropes are merely used as a framework to explore issues of human suffering. 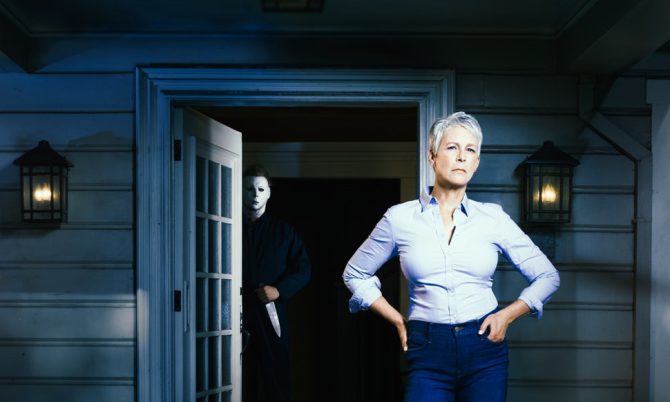 Halloween, at its very core, is a film about trauma and how we process it. Since the incidents of the original film, Laurie Strode has been consumed by that night in 1978. The idea of a returning Michael Myers has driven her to the brink of mental breakdown. She’s spent her life preparing to face him in some sort of final battle in a quest for redemption and, in the process, has lost her family, become a recluse and is in a state of emotional self-destruction.

Like recent horror hit Hereditary, some of the best scenes in the film are built around the family drama of Laurie’s relationship with her daughter. The rawness of their interactions, specifically in the restaurant scene, brings home the impact that Myers has had on the entire family.

Michael Myers is exactly the same. He truly is the bogeyman. Murdering not because he wants to but because that’s what he does. There’s no joy, there’s no sarcastic comments, there’s no satirical tone. Michael Myers exists solely to murder, that is his reason for being.

Disconnect between action and reason makes Myers a truly terrifying proposition. He stalks Laurie’s every waking thought, whereas she means absolutely nothing to him. After the inevitable escape from incarceration he doesn’t seek her out, there’s no attempt to locate her, and he isn’t driven towards ‘finishing off what he started’ – He, or it, simply murders whoever he encounters with reckless abandon and without forethought or remorse.

What drives the sense of dread within the film isn’t that the Bogeyman is real, it’s the randomness of his acts. There’s no premeditation. Myers doesn’t care about his victim’s social standing, gender or race, he simply sees them as a conduit to fulfil brutality. One particular scene epitomises this. When the Sheriff is driving around town looking for Michael and discovers him aimlessly walking around, Kitchen knife in hand, he isn’t actively seeking someone or something, he has no motive or goals, he’s just waiting to destroy whoever crosses his path.

The true horror of Halloween is Myers, as the abuser, leaving a shadow over his victim that cannot be unbroken. Laurie, weighted by the devastating long term effects of a series of traumatic events, is changed forever as she is unable to fully process the ordeal of the original film. She cannot move on, whereas Myers is completely unaffected and likely unaware of the imprint he has left on her life. 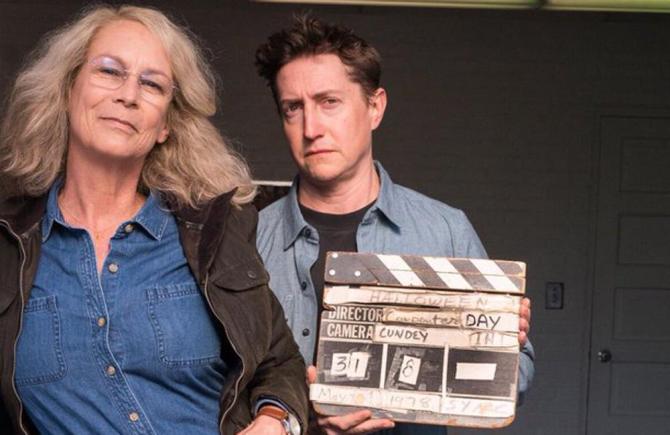 When I first heard that David Gordon Green was directing and Danny McBride was part of the writing team, I was sceptical. I had images of Kenny Powers standing in front of Michael Myers giving him the finger as he gulped from a beer. Thankfully, they clearly care about the source material and have taken great care in developing the story in the right manner with the right tone.

Halloween starts and ends strongly with really interesting juxtapositions of character throughout. There are moments that, although telegraphed in the setup, made me genuinely pop. Sequences during the course of the film that capture the essence and lore of why Michael Myers is so terrifying. This is specifically clear when Michael is going from house to house unnoticed on Halloween night, as he plays his own twisted version of trick or treat.

Other than one very obvious and tired twist, the film flows nicely and is paced well. The cinematography has a mix of the original movements with some genuinely stunning visuals, namely in the scenes featuring the facility where Michael is locked up and on his Halloween night murder spree.

The performance of Jamie Lee Curtis is masterful. She plays the tough, hardened Laurie with such unfiltered rage but with an undercurrent of stark vulnerability that makes you recognise the struggle within her character. The acting throughout the film is a good standard but Judy Greer’s performance is another highlight, as she again shows her ability to raise the quality of whatever project she is a part of.

However, Halloween isn’t without its issues. Some out of place dialogue between characters, specifically the squad car scene, could be straight out of a stoner comedy. There are one or two under developed characters that have no real payoff, as well as a few jokes that break from the menacing tone. The second act of the film drags slightly with a seeming lack of direction or plot development until a series of random events occur.

On the whole though, Halloween masterfully returns Michael Myers to his former glory. He’s genuinely scary on screen and the tone of the film heightens that threat, which seeps into the atmosphere in an all-encompassing way. An original John Carpenter score is the icing on the cake of what is a memorable if not wholly original cinematic experience.

What are your thoughts on Halloween? Is it the film you were expecting? Comment below or tweet us@WarpedFootage