Slapstick and physical humour is sometimes seen as lowbrow in certain circles. In fact this style of comedy is layered and intelligent. It is a form that transfers very well into the realm of film.

In the early days of comedy two of the big name players on the big screen were Buster Keaton and Charlie Chaplin, both hugely influential characters. The physical panache of slapstick comedy, of which they were masters, led itself to a very visual style.

In the early years of screen comedy, Chaplin, Keaton and Harold Lloyd were innovators, making each feature mean much more than someone simply being physically abused. It is as much to do with emotion and satire, as it is someone being slapped with a plank of wood.

The early days may not have had the technical prowess of modern Hollywood but what it did have was the first comedic innovators. Their influence has led to interesting and subversive comedy making its way into the mainstream.

Although very visual in style, Chaplin’s films have more depth to them than many people, critics included, give them credit for. The ‘Little Tramp’ continually championed the working class and the downtrodden, which mirrored his own upbringing.

Looking at more recent times, the gross-out films that became more and more popular in the mid 1990s are still a huge favourite of the film going public in contemporary times. The gross out comedy is much more than just a collection of shocking or disgusting scenes; it is a subversive staple of contemporary cinema.

The Farrelly Brothers have become masters of the gross-out comedy with the likes of Dumb and Dumber (1994) and There’s something about Mary (1998) being both commercial and critical success stories. Why were they such a success? They were successful because they test the boundaries of what is acceptable to the audience.

Gross-out films marked a resurgence of an episodic and slapstick style of comedy.

The Gross-out comedy film is a further development of the body as a category of innovative comedy. Elements were used in the early days of slapstick by Chaplin and Keaton but were developed in a more unique and aggressive way by the Farrelly Brothers in contemporary times. 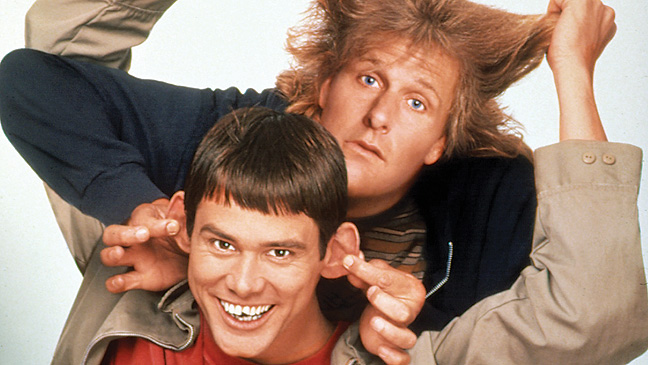 In 1994 Dumb and Dumber was released, thrusting the Farrelly Brothers into worldwide acclaim. It would split opinion amongst critics with some seeing it as a one dimensional gross-out film and others seeing it for what it is – a reinventing of slapstick with a focus on the body.

The Farrelly Brothers first feature film introduced us to the high concept big budget, gross-out comedy they would become famous for. The simple concept – grown men acting like  morons, is an idea that wouldn’t strike the average filmgoer with instant attraction. However, it grossed $24,275,374 from a budget of $17,000,000 so why did people find it so appealing?

Dumb and Dumber is the evolution of a genre. The foundations laid down by Keaton and Chaplin are built upon by the Farrellys but the characters of Lloyd and Harry, played to perfection by Jim Carrey and Jeff Daniels, have as much in common with Wilder and Pryor as they do with the classic slapstick stars.

The Farrellys focused on reinventing slapstick and emphasizing the importance of the body, whilst maintaining a critical edge about social conventions and ideological values.

One of the key aims of the Farrelly Brothers is to get the audience to feel connected and empathetic towards characters that are acting in a ridiculous manner – a decision the audience make on their own. They set out to woo the audience into appreciating Lloyd and Harry just as they are – people with faults.

Dumb and Dumber stays deliberately good-hearted without ever resorting to sentimentality but is the audience laughing with the characters or at them? Does it make the audience question themselves and if so should they feel guilty? One scene sees Lloyd trick a blind boy into buying a dead budgie. It is a scene that has been greatly focused on, but is it okay to laugh at a grown man tricking a blind boy?

The casting of Jeff Daniels, known for more highbrow comedy like Woody Allen’s Purple Rose of Cairo (1985) and especially for dramatic roles like the 1993 War Epic Gettysburg, alongside the high energy Jim Carrey. Even the casting could be seen as slightly offbeat with the broad physical comedy of Carrey offset against the serious Jeff Daniels.

As one critic said about Dumb and Dumber ‘It has a radical and liberating potential, breaking through the limitations of dominant cultural norms.’ (King, 2002)

The characters are not so much dumb as they are honest and focused on their goals. In their mind they are 100% serious and a lot of the laughs come from the fact that they do not realise how stupid their actions are or the cause and effect of what they are doing.

Jim Carrey’s body bends and shakes as he emotionally connects with the audience, putting them through the ringer. Jeff Daniel’s face, particularly his tongue in one scene, conveys the pain and confusion of what is going on around him. The audience can therefore connect physically with the characters, wincing as Daniels hits Carrey on the back of his legs with a cane.

The way in which the characters use their bodies to show and question the ideals of what is normal in society is a key point within the film. Jim Carrey’s character Lloyd serves his best friend Harry a cup full of laxatives to get his revenge on him for stealing his girl. The result is a toilet scene in which Harry has explosive diarrhoea, which is the physical embodiment of Lloyd’s anger and resentment.

The fear and shame of bowel movements and bodily functions resonates with the audience but they continue to laugh as Harry empties his bowels or Lloyd breaks wind. The Farrellys take these bodily functions and use them as a mirror for the audience questioning their limits of decency and taste. The same can be said for the issue of stereotyping of disability.

It is much more than a stupid gross out film, as Peter Stack said in his review in the San Francisco Gate in 1995:

“Dumb and Dumber blows the lid off pretensions and goes on a kind of idiot ride with such amazing dexterity and often bold caprice that the film becomes a surprising satire of  American culture.”

What are your thoughts on Dumb and Dumber? Is slapstick a form of comedy you enjoy? Comment below or tweet us@WarpedFootage