Chris Gallagher discusses his favourite film – Annie Hall. Is it as influential as they say?

Described as a romantic comedy, Annie Hall brought a level of sophistication and intelligence to the comedy genre and winning so many Oscars was its reward for being daring and innovative. Allen brought in the highly regarded cinematographer Gordon Willis to produce an air of erudition. After all, Willis had previously worked on Klute (1971) and The Godfather (1972).

The film itself is about a doomed relationship between two people who, although imperfect, are very affable. It is a story that has been told many times before but Woody Allen used various different techniques that broke traditions of narrative and style.

During the Renaissance period of American cinema we see a lot of films dealing with the issues of self-conscious reflexivity, Annie Hall is a prime example of this. Self-conscious reflexivity in fiction and film is when a production calls attention to itself as a cinematic construct, for example when a character suddenly addresses the audience.

The opening scene of Annie Hall sees the protagonist, Alvy Singer, played by Woody Allen, addressing the audience directly. By instantly breaking the fourth wall, Allen shows that this is more than just a standard comedy. While watching the sequence, the lines are blurred and a form of hyper reality takes over. Is this the character or Woody Allen speaking to us? Is he talking about himself or Alvy?

Alvy addresses the audience directly on numerous occasions with the most interesting being while in line at the cinema. As Alvy and Annie wait he gets increasingly annoyed at a discussion taking place with the couple behind him. Alvy points out the frustration of the situation to the audience before bringing the topic of the discussion, Marshall McLuhan, out from behind a sign in the cinema lobby.

Using this technique of breaking the fourth wall could become tiresome and although the gimmick could lose its effect with repetition, Allen handles it with aplomb. By Getting Marshall McLuhan to be in the scene and put down Alvy’s tormentor he is in fact satirizing himself.

With Alvy addressing the audience throughout, we are drawn into his world and become part of the film itself. Allen and Keaton’s own personal identification with Alvy and Annie further confuses the distinction between the inner world of the film and the outer world of real life. 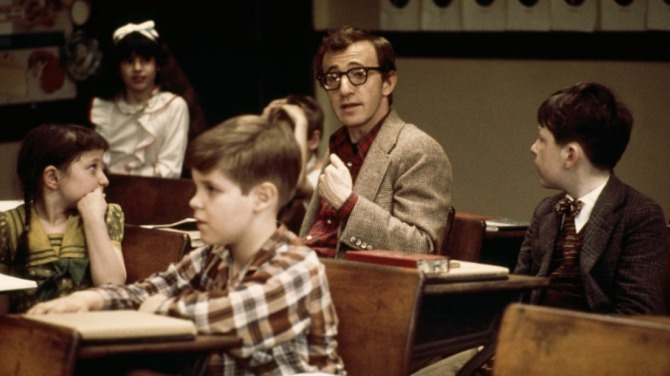 The narrative jumps forward and back – occasionally confusing the audience

The narrative organization of Annie Hall is loosened showing different parts of the relationship between Alvy and Annie at different times. By jumping back and forth across the history of their relationship the film fractures the classic ordering of comedy narrative.

Annie Hall’s flamboyant narrative derangement makes the breakdown of structures a principal issue in the films representation of intimate affairs, implying the difficulty of sustaining attachment in a post-1960s world in which traditional conceptions of heterosexual intimacy have lost their authority.

The film is punctuated by the intelligent use of flashbacks that become a key component in the narrative. Each flashback is a key point in the lives of Alvy and Annie, it illustrates some watershed or vignette in their lives and revives the savour of a certain period.

The film starts at the end of the relationship with Alvy’s monologue and we jump to different parts of Alvy and Annie’s lives, from Alvy’s schooldays to the various relationships that each of them have had. The scenes do not progress chronologically, but more in a dreamlike fashion, jumping back and forth among different stages of the relationship.

We see the relationship between Alvy and Annie develop from her initial awe of his intellectual ability, as he encourages her to learn and try new things, to the moment when she realises that she is his equal. Annie embarks on a singing career that is at first troubling, as she fumbles her way through the performance before she eventually gives an accomplished performance, highlighting her maturing journey.

The passage of time is revealed in the improvement of Annie’s singing, in her increasing willingness to assert her own ideas and challenge Alvy’s, in the diminishing joy of the relationship, and finally in her relocation to California.

The infamous lobster scene – the first scene to be filmed.

Annie Hall revises the genre of romantic comedy in many different ways. As mentioned previously the self-conscious reflexivity shows an interactive connection with the audience and the cast.

One of the key components of the romantic comedy is that the couple involved in the story will get over all obstacles and differences to be together. Romantic comedy is founded on the promise that differences will ultimately be overcome but in Annie Hall the relationship between Alvy and Annie fails because they cannot find common ground without risking a damaging loss of self.

The opening monologue of the film reveals that Alvy and Annie have broken up and therefore the expectation of the audience is shifted. The uncertainty of how the film will pan out romantically puts the audience on edge from the start.

Annie Hall has influenced other comedies, giving them the freedom to express themselves in a less conventional way. It is a film that brought a level of legitimacy to the comedy genre, bringing sophistication as well as winning numerous awards.

The techniques used by Allen, breaking the fourth wall, a use of animation and other visual motifs makes Annie Hall a Postmodern classic, playing with convention and mixing old and new methods. The loosening of narrative organization gives a sense of chaos – but controlled chaos.

Annie Hall is one of Allen’s most eclectic and innovative films, exploiting split-screen, animation, instant replay, and by using visual stream-of-consciousness devices. Allen introduces a subtle courtship interlude and several scenes of splintered realism where Alvy leaves the confines of the plot to mull over events with his audience.

Woody Allen redefined the romantic comedy by adapting and developing techniques that had scarcely been used in the genre previously. By changing audience expectation he brought a level of uncertainty and by playing with style and narrative he made Annie Hall stand out as a great film and not just a great comedy.

What are your thoughts on Annie Hall? Is it really an innovative as mentioned above? Comment below or tweet us@Warpedfootage

One thought on “Annie Hall – More Than Just A Romantic Comedy”